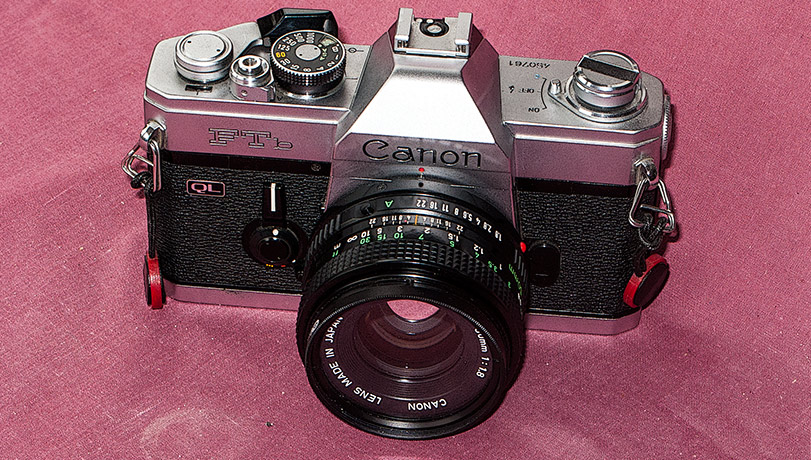 This is really an introduction to a project on tracing camera evolution from the 1970s up until today. It is not intended to be a ‘definitive’ piece of work on Canon or the photographic industry because it is highly personal in the sense that to illustrate these changes I am using cameras that I own, have acquired over recent years and do actually use today.

It was about three years ago that I had the urge to go back to shooting wet film and specifically 35mm in black and white and to that end I bought my first second hand 35mm camera a Canon Ftb which was pretty old school dating from about 1981, solidly built, totally mechanical and needing only a small battery to drive a match needle system for getting exposure settings.

The details and consequences of all that story I’ve covered in another blog on 35mm cameras so I’m not going to go across all that again instead I will focus on an odd phenomena that has happened to me many times over the years and it might be amusing to share. On quite a number of occasions I have made decisions or choices that from the outside may have seemed totally random, certainly idiosyncratic as in “What’s that about ?” and yet later as if by magic it has all fallen into place as if I had planned it all from the beginning.

This was never true because even to me it often seemed as if I were in some way walking backwards through my life and I would be hard put to rationalise my choices, well at least initially. As to why I am writing this and in particular with regard to shooting wet film is because it is only in the past few days that this has fallen into place for me. It is as if I am finally catching up with my own decision made 3 years ago when I decided to buy a 35mm camera.

I take a lot of pictures, going out for my morning bike ride I can come back having taken 50/100 images, a lot more if shooting wildlife at high speeds such as 10fps. Obviously I don’t keep them all, they get culled heavily because there is no point in keeping and backing up repetition or just crap images. So it was in this context that I wanted to slow things down by shooting 35mm, sending films off to be developed and having to await the results plus I shot exclusively in black and white.

The initial results were so, so, okay but not dramatic in fact at that stage it was when the nerd in me took over and I collected a few other camera bodies which in some ways didn’t seem to make too much sense even to me at the time. In fact all that I could say was that I didn’t spend very much money on this and yet it has all now fallen into place, well at least for me.

I’m not sure just how ‘accidental’ it was in any sense because underneath it all there is a kind of logic at play. When it comes to my DSLRs and other digital cameras, the die was cast in 2000 when I bought my Canon D30 DSLR because it is less the camera body you buy into, it is the lens family because bodies come and go, the lenses move from the last model to the new one well at least until they change the lens mount !

However that is a totally separate issue from my journey in 35mm camera bodies which truly does seem rather more accidental. At Christmas 2015 because I wanted to see what these “mirrorless cameras” were all about, I picked up a bargain due to a double discount on a Panasonic/Lumix G7 micro 4/3rds camera so that I got the body and a lens for about £320. If you don’t know, compared to full frame cameras micro 4/3rds are crop sensor cameras which give you a x2 multiplier on standard focal length lenses so a 50mm becomes 100mm in effect and so on. The pain to this is that you pay for this on ‘wide angle’ lenses which need to be very wide indeed compared to full frame and for quality that gets expensive.

Now whilst the G7 was fun and had quite a few bells and whistles that I wasn’t previously used to, it didn’t convince me that this (micro 4/3rds), was the way I was going to go in the future, I certainly didn’t want to build an expensive second lens collection to go alongside my Canon glass. It was at this moment in time that I discovered that via adapters you could mount ‘vintage’ lenses on the G7 which would require you to focus manually. Looking around I found that at that time, the most ubiquitous and inexpensive lenses around were Canon FD glass dating back to the 1980s so for very little money, I fairly rapidly made a collection of the most obvious focal lengths to adapt to the G7.

Which brings us full circle as to why when I wanted to buy a 35mm camera, I went for the Canon brand, simply I already had a set of FD lenses, it would have made no sense to go for any other brand.

When I decided that my existing website where I was posting little galleries of images just didn’t work for me and was really rather boring anyway, I knew that I needed a theme to provide a purpose for the site, a narrative to hold it all together. When I started a year ago creating new material, I gradually came to realise that it needed to be very personally driven around my experiences and circumstances like me being old and so on. In addition it needed not just individual images but also required an underlying theme to drive it forward and here we are, we have arrived, the theme is camera developments as seen through the eyes of one brand, Canon cameras.

It is not that “Only Canon will do because they are the best etc…” or anything like that, one could probably do the same with the Nikon brand and their equivalent models but the simple truth is that I now own sufficient camera bodies to tell the story and they are all Canon. Also and whilst I am using Canon to tell the tale, it isn’t just their story, it is a competitive industry and most of the things Canon has done and tried over the years so too have other brands, it really is a far broader story.