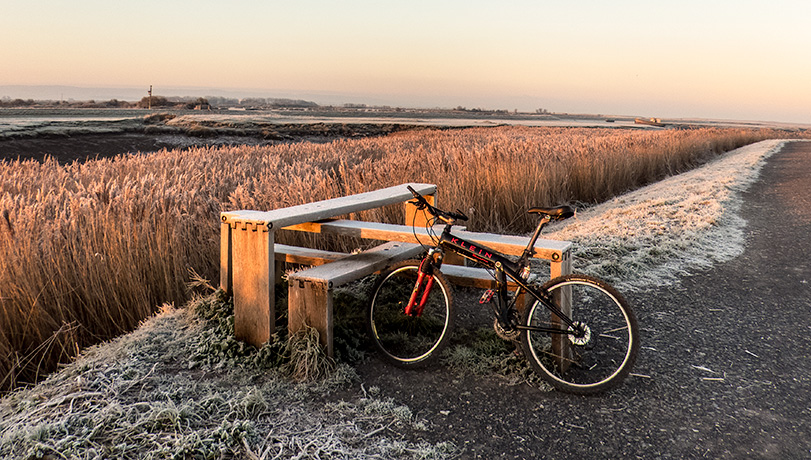 The reason that I take so many photographs over the course of a year is wholly down to the fact that I go for a bicycle ride every morning providing we don’t have very bad weather which living on the coast means gales or very high winds. You can only ride one bike at a time and yet I have three of them, all mountain bikes, two full suspension and one hard tail but like me, they are getting on in years. One I bought in 1995, another 1997 the last one 2002 and as I tell those interested in such things, “I don’t own three bikes, I have three stories” because each bike has it’s own story to tell.

What this has to do with photography ? There is a well known ‘ailment’ called GAS – gear acquisition syndrome where people become fixated on buying loads of gear, far more than they could possibly use, related to their particular hobby and quite often possessing a ‘thing’ seems more important to them than actually using it. I don’t suffer from that, if I can’t make reasonable and frequent use of each bit of kit, I don’t want to own it because dusting totem poles is not my idea of fun so if I can’t use it, the kit gets moved on.

My current cameras can be broken down into three specific groups and by doing so, their functional value falls into place and how they get used. I am not going into great detail on particular cameras here, if you are interested I have written about them in more detail on a series of blogs which can be found under the “Hardware” menu section, so for now a helicopter view of the groups.

I will begin with my Canon D30 and Canon G5 because they started a habit I adopted in having a “main” camera with interchangeable lenses paired with a smaller though highly capable camera which I could carry with me anywhere. The D30 dates from 2000 and the G5 from 2003 but it sets a scene and also tells a tale because there are also other lightweight ‘carry cameras’ that won’t get a mention because whilst I still have them they are hardly used, they have no trade in value and the “technical tide” has left them stranded.

What I think of as my current main camera setup are a pair of DSLRs. Living on the Somerset Levels which is a large flood plain the main subjects for photography are landscapes and wildlife I therefore have two DSLRs, the Canon 5DS for landscapes and the Canon 7D MkII for wildlife. The beauty of this particular combination is that being of the same generation they handle almost identically, share the same batteries and obviously all of my EF lens collection.

My lightweight carry anywhere options are now my Canon M series bodies. The M series is also an interchangeable lens system but both considerably smaller and lighter than my DSLRs. I have a number of native lenses to go with them, 5 in fact which is I suppose quite an achievement as I think they have only ever sold 7 different ones since launching the M series back in 2012. Included in the M range is my most recent purchase of an M6 MkII on which I’ve written a post elsewhere.

Clearly these camera bodies can all use any of my native EF lenses, the M series via an adapter. But it goes a bit further than that because whilst in manual focus mode only, again via adapters my M bodies I can use my collection of Canon FD glass. In fact and again using adapters, I can also mount FD glass on my EOS bodies too but I don’t. My FD lenses which apart from a 50mm 1.4 lens, didn’t cost me very much money were bought over a period of time when I had the predecessor to my M series a Lumix G80 which via adapters I could use them on though the focus peaking wasn’t as good as on the M bodies.

The final group is made up of a couple of 35mm wet film cameras, both of which use FD lenses. In addition I have a further 4 35mm cameras that use my Canon EF glass, again the story behind how that happened can be found under the Hardware menu. However between these two main groups, the vast majority of the collection comes together as quite an integrated whole and not quite as bonkers as may be thought at first glance leaving only one further group to deal with.

The odd one out and not illustrated here is my Yashica 124G 120 roll film camera which I bought in 1986 and still use today from time to time when I want a totally different photographic experience. The story behind this is also written up elsewhere in my posts. So whilst at first glance it may all look like a bit of a heap, in fact they are all useful in one way or another and each will get used though obviously, some more than others. Does this mean that I am opposed to the brand new and far more technically advanced cameras of today ?

If I weren’t 75 and had the required amount of money to go out and buy say a Canon R5 and a couple of native RF lenses, would I ? The answer must be that I would be very tempted if only because the cameras on offer today from companies such as Canon, Nikon, Sony and Lumix are technological masterpieces in many ways and many of their new lenses match that high standard too.

However from my perspective as an old man, I’m not too sure that I have the time to follow through on what is the start of another revolution in photography because that is what this latest kit points towards. Of course it is not just a revolution in camera technology, it is a harbinger of changes that will further integrate AI technologies not only at the moment of taking a photograph but extend all the way through to how images are processed in post production and what the end results will be.

This can be of no surprise to anybody because some years ago now and as smartphones improved, the mass of the public have abandoned purpose built cameras in favour of smartphone photography which integrates well with their use of social media and requires little to no image processing if you ignore applying ‘pixie ears’ etc. The camera sensors on smartphones are tiny so in order to produce pleasing “out of the box” pictures, very clever software including AI techniques have been employed and this use will expand greatly in the years ahead.

It is inevitable that a similar approach will become the norm in purpose built cameras, sooner rather than later. This is not necessarily a terrible thing however there are other issues involved which will impact the final outcome and in particular how a much reduced camera industry due to smartphones syphoning off sales volumes will restructure itself. Whilst I am sure this will be an interesting transition, I’m not so sure that I have either the time or money to follow it so for now, far better to use what I have already to hand and ‘chronicle’ photography as I know it.

Perhaps emphasised by the current/recent Covid 19 restrictions we must live under, it follows that during this period I am photographing the same sort of thing each day. This should be both boring and pointless one might think and yet it is remarkable just how the often subtle changes in the weather will impact the light and therefore the images you end up with. One of the advantages of the British Isles being quite small is that our weather is very maritime influenced and we get all 4 seasons quite distinctly which means that the landscape very rarely ‘rests’ it is always in motion visually.

Most of us after looking at a YouTube video on shooting landscapes in exotic places probably think that our lives and photographic choices are very limited but it really isn’t true. More likely because the world around us is “always there” we become blind to its beauty and potential so that only an “outsider” could appreciate it, we need to become our own outsider.