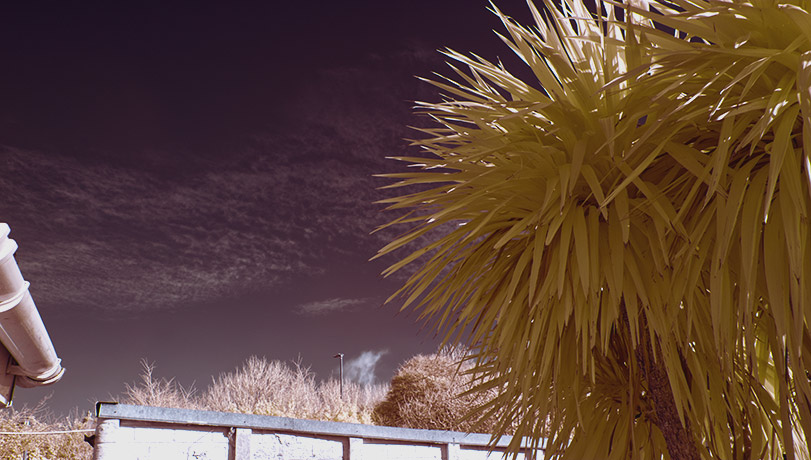 The first recorded use of infrared film goes back to 1910, it was further developed into a viable medium during the 1930s then used during WWII for stereoscopic photography from reconnaissance aircraft for intelligence gathering. Some decades later and ‘false colour’ film versions from Kodak and others made it popular with some photographers during the 1960s because it fitted in well with the mode of the times with its psychedelic art themes . However it rather fell out of fashion since and people lost interest as we entered the age of digital photography. To get some context for just what infrared is the following is a simple description:

Light is expressed as ‘light waves’ which have different frequencies measured in nanometers which is actually a measurement of length and where the light waves sit along that, we humans cannot see the whole spectrum but we can feel it expressed as heat. If we start with ultraviolet light that exists between 300 – 400 nm and infrared starts around 700 nm and upwards to 1,400 nm so visible light which we can see and which cameras are designed and calibrated for is between 400 – 700 nm.

Thinking only of digital photography at this point, camera manufacturers use filters mounted over the camera’s sensor to limit the wavelength that the camera can ‘see’ so that we can take pictures that in terms of output and colour rendition, look natural to our eyes. For my purposes this loosely describes my interests in terms of photography which covers normal vision (colour range), false colour and pure infrared.

The first and most obvious starting point as I have a number of 35mm wet film cameras was to think about buying and using infrared film but as I investigated it I found one big problem – exposure times ! The coatings on the film are specially formulated for infrared but you still have to block out the visible spectrum by using a 720nm filter over the front of the lens. But as it blocks out ‘visible light’ it means that you cannot see through the viewfinder what you are taking a picture of if using an SLR camera. Focusing is also different and just how do you work out the exposure times is a problem because your cameras inbuilt meter won’t work.

There are a whole number of suggested formulas as starting points for working this all out but inevitably you really need to bracket pictures for exposure values and experiment with roll after roll of film until you build up the knowledge and experience required to nail it all first time.

This lack of the immediate feedback that I had got used to with digital photography didn’t seem all that attractive to me as a starting point so I investigated further, were there other options ? And indeed there are the main one of which is converting a digital camera to shoot infrared specifically.

I came to the conclusion that was the best way to go and despite the cost of just over £300 to convert one of my existing camera bodies to shoot 720nm infrared. The down side was that the camera henceforth could only shoot in infrared, the plus side though was that I could see what I was doing and could shoot hand held with no long exposures. The second bonus to this is that during the conversion process, the focal plane is adjusted which overcomes the focusing problem too.

I sent the camera off to be converted in mid Autumn 2020 and hit a problem thrown up by the Covid pandemic, that some parts were on ‘back order’ so it was well into November when I got it back and not the ideal time of year, Summer being far better. Undaunted I started playing with it taking lots of pictures many of which were total dross. However because I could see what I was pointing the camera at and could not just see the results but also manipulate the images on a computer, I started to realise what type of images and lighting did and didn’t well work in infrared.

Now in the Summer of 2021 this converted camera has come into its own and I have taken very many landscapes which really ‘light my fire’ and have led me further into the techniques of doing infrared photography which are not just concerned with taking the original images but also post processing them on the computer.

The Reason for my Choice

Because I have quite a number of cameras, selecting one to be a dedicated IR camera was not a great sacrifice but of course the one I selected was a Canon M and as the original in their M series line, is not worth a lot of money, at best £100 and here I was spending £300 on it to convert it. However, the M camera is very capable as a stills camera plus it will also shoot Full HD video which was another thing I might want to experiment with.

To be fair though and at the back of my mind, I calculated that I could probably recover 50% or more of my expenditure if it all went terribly wrong and found I hated it all by selling the converted camera on Ebay, thus moderating my financial losses to some extent. As it turns out, I love it because it’s rather more than a one trick pony and I can see that I’m going to get an awful lot of mileage out of it especially in terms of landscape photography regardless of whether I manipulate images for false colour or use images as a basis for black and white prints.

The truth is that despite having spent time reading up and watching videos on infrared photography, my original decision to go the hardware conversion route was taken blind and very much a leap of faith but for me it works. I will take my time to develop my IR story on this website however I am not interested in being a “tutorial source” on this or any project. However if the idea of infrared interests you and you want more information right now, I can give you a couple of very worthwhile links to follow on YouTube that will help you.

Specializing in infrared and very detailed is – Rob Shea Photography

For tutorials on the various software packages for processing infrared I would recommend starting with Rob Shea’s channel on YouTube because he has done short tutorials on probably most of them. If you pick on one particular package that works for you then more in depth tutorials on the broader capability of that software are generally also available from many others on YouTube just do a search.

Earlier I described broadly the technicalities of infrared and that my Canon M body has been converted to shoot at 720nm but there is another possibility and that is what is called a ‘Full Spectrum’ conversion. What happens with this is that all filters are removed from in front of the sensor so that the camera can ‘see’ the full light spectrum even if we can’t and you via filters can control what that range is. If you put a UV cut filter on the lens you cut out ultraviolet light so that now you can apparently use the camera as a normal one in terms of the colour and the end result. Put an IR filter on the front of the lens and you can then use it as an infrared camera.

Using filters on the front of your lens particularly an adjustable polarizing one is pretty normal and I have also used similar adjustable circular ND filters for some time because they are very convenient. More by accident than design, I discovered that you can also get circular IR filters that will cover a range from 540-720nm which is a range that goes from mild IR – false colour through to full IR so I have acquired some of those. It may well be that in the future that I will replace these variable circular filters with specific wavelength ones such as a 560nm because such ‘fixed’ values are likely to be more reliable particularly if I want to shoot video.

Although not my immediate interest, full spectrum cameras are apparently especially useful in astrophotography where filters can be used to enhance gas clouds etc so overall they represent an interesting proposition. I have another Canon M series body ‘spare’ an M10 so I have sent that off for conversion to a full spectrum camera some months back and look forward to playing with that and adding it to this story on its return though sadly and due to supply issues, this might take longer than expected too.

In one sense, this delay may not be that important because although I got my 720 converted M camera back last November and have used it a lot since then, I still haven’t finished experimenting with it and cannot say “Ah yes I know it all…” This M body is for a fixed wavelength of 720nm whereas the full spectrum M10 will be totally flexible and therefore more demanding, I will be even more error prone I suspect so it will take me into next year before I’m even starting to get on top of it.

A Conclusion for Now

As an aside, when you have a hobby that includes ‘hardware’ of some kind, like children we all like to get ‘new toys’, a new bike, fishing rod, golf clubs or camera and yet for me, getting both of these older cameras modified in this way I find more exciting than getting a brand new ordinary camera fresh out of the box.

Although this may at first glance seem a rather odd thing to say in reality it isn’t because whenever you get a new camera, you have to start by ‘learning it’ which has become even more so with the increasingly capable but complex models we get served up today. Whereas with both these M series cameras which I have had for some time and used quite a bit normally, I know how these work and what they can do which leaves me free to concentrate on creating the images I want without the hardware getting in my way.