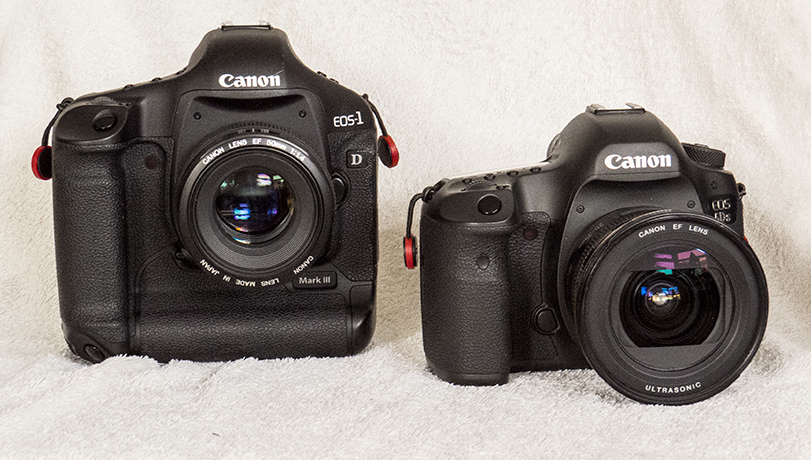 I have a book project that I refer to as “Canon History the Past 50 years” but in reality I’m only using Canon as the brand because I own copies of the main camera bodies from that time span, in reality what Canon did technically ‘back in the day’, all their competitors did too so it is really intended to be a bit broader than just this one brand. However and as the pictures below demonstrate, the reason that I bought the 1D MkIII were to do with ‘buttons’ of all things. I wanted to understand just why a ‘feature’ introduced on a ‘seminal’ camera body with an FD mount launched in 1986 was still in use today on even a fabulously new model like the R3 !

From ‘behind the camera’ the pictures are of the left hand shoulder of the camera body and the question is: “Why still use buttons today instead of the industry standard rotating dial ?” I think I understand what that is about but will hold off on that for now, ‘Save it for the book’ perhaps. But all that said, it is the background reason for me buying a 14 year old model of a ‘working pro’s’ professional camera body.

This particular model being only 10 mpx was a ‘sweet spot’ in terms of a second hand price and the one I got had less than 50,000 ‘shutter activations’ at a cost of roughly £250. Now to put that into perspective, the original 1DX an 18mpx camera launched in 2012 will still cost £1,400 today for a good one and a 1DX MkII a 20mpx camera launched in 2016 with almost 200,000 shutter activations will cost above £2,000 so I did “rather well” under the circumstances.

In order to answer the ‘button question’ I had to use the camera in real world situations and in doing so found that it was an enjoyable experience. There are odd but nice features such as the battery status accessible through the menu system as pictured below, highly useful.

As we travel quite quickly it seems to me through Autumn with it’s bright light and long shadows as we approach the Winter, it is both a difficult and joyful season for photography. Over the past couple of weeks I have shot similar scenes with both my 5DS and the D1 MkIII though not on the same day but pretty much under identical light which is what the two galleries are about below.

I’m afraid the images aren’t stunning but my aim is to demonstrate that when dealing with photographs for the web, to a point it hardly matters how many pixels the camera had that took them. In fact take that a step further and thinking about mobile phones which certainly in younger age groups is by far the dominant way people consume content and if your target is the mobile market, both web graphics and video can easily be good enough for creating content.

I have been using quite small images on this site – 811 x 608 pixels in order to keep the site lightweight and responsive but for these two have gone for 2,000 x 1,200 pixels. From this the first takeaway is that there is little to choose between them despite the 5DS having 5 times the mpx of the 1D. Obviously if you look at the full size originals and even without pixel peeping, there is a heck of a difference caused by a combination of more pixels, a far more modern image sensor and processor with far greater dynamic range.

However two other things need to be factored in and regardless of what camera you are using. If your target end use is on a website, the amount of mpx the camera has that took the image is less relevant. That said of course, you do need to understand and know your camera’s technical limitations regardless of its age and work within them. If you need high resolution images that are going to be enlarged, you need to choose the appropriate kit, if for a website then things generally are not so critical, very much a case of ‘horses for courses’ as they say.

This doesn’t mean that older kit like this 1D are going to perform equally as well as newer hardware when you want large images for print, simply because the far superior ability of modern image sensors and processors means that you can shoot at far higher ISO levels and still have a pretty clean image. Push the ISO on older kit with a maximum 1600 ISO and you will soon hit some quality problems on larger print images.

There are ways around this to an extent but it requires working very differently compared with what is possible with newer hardware where you can rely on ‘Auto ISO’ and just concentrate on shutter speed and aperture when shooting in manual mode. In one sense by using a camera which in this case is 14 years old, an eternity in digital development, it is a bit like stepping back to wet film when a fastest ISO speed of 400 was what you got as standard. However, working within these limitations is very good for making you a more ‘aware’ photographer even when you switch back to the latest in camera models.