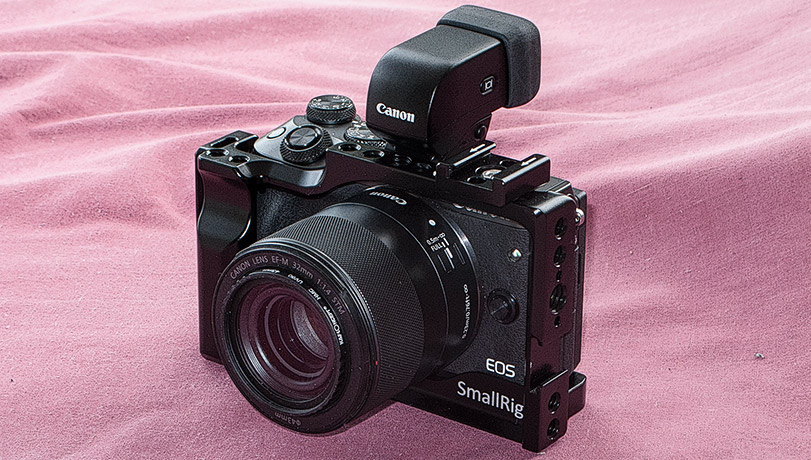 My first love is still photography but I need to get fully involved in video and from experience I know that for me, in order to achieve what I want when it comes to ‘new stuff’, I always need to focus on one thing at a time so for the immediate future I will need to concentrate on shooting and editing video. This doesn’t mean that I won’t be shooting stills because in this digital age, most cameras do both but it does mean that I will be using my M series cameras mainly rather than my DSLRs over the next few months.

It is not just a question that I may not be very good at multitasking but rather more that I need to fully immerse myself in video and the cameras I have to hand that best enable me to do that. Whilst as a brand, Canon do achieve a familiarity in the menu system and so on that makes switching between models easier, it’s not quite as simple as that because each model will have it’s own character and quirks.

I bought my 7D MkII before I picked up my 5DS and being of the same design generation, in terms of features, menus and ergonomics they are pretty identical cameras. That said though, when I first got the 5DS, I was terribly disappointed with the results I was getting until I realised that the 5DS wasn’t just a 7D MkII with lots more pixels, it was a different camera altogether and needed to be used differently.

The 5DS has 50 mpx compared to the 7D MkIIs 20mpx and it only needs a moments thought to realise that the former is a much slower camera if only because of the amount of data it has to handle with every frame it takes. In comparison the 7D MkII is a sports/wildlife camera that is optimised for speed and hand held shooting, part of that is the lower resolution rather like the 1DX series, in the field these type of cameras do get used very differently. The really big plus of the 5DS comes when shooting landscapes mounted on a firm not flimsy tripod, it is capable of delivering amazing detail, it is designed for thoughtful photography and not for ‘shooting from the hip’.

Coming to the M6 MkII

The point is that ‘cameras are not just cameras’, they tend to be designed for a particular purpose or at least, with the emphasis on a particular type of use. All that said though, the current crop of camera models from all manufacturers do offer in one body the closest you can come to “all purpose” cameras to a much greater degree than models from only 4/5 years ago. If I look at the M6 MkII which is now about 2 years since launch, and it’s technical capabilities, it is a far more flexible and capable tool than any other of my cameras in what it can do so perhaps it is not the camera itself but rather more the user behind the camera that is the problem– me!

This is the reason that I must switch my focus and just use my M series cameras for now because it is the best way to immerse myself in their potential to deliver video material for my projects. Whilst I will obviously use them for stills photography as well especially the infrared and full spectrum bodies, the main thrust will be on shooting video and making short stories that I can edit into a final product so it does require a change in my current mindset.

As video is about combining post production with the actual video sequences you are shooting, I will probably start by shooting and editing opening title sequences for a video story rather than attempting a proper ‘story’ as my first efforts. Although this may seem an odd approach, opening sequences have to be mini stories in their own right in order to be effective, don’t they ?

During the Spring through to Autumn, I normally have my cameras and lenses on a shelf so that I can decide on the day which I take with me that morning, a digital camera plus a 35mm and suitable lenses… However as we are now firmly headed into the Winter period, time to pack away into my storage cupboard the kit that I’m unlikely to use over the next 4 months if only to reduce the dusting !

Obviously if I see an opportunity to shoot some black & white film or whatever, I know where they are and can quickly grab what I want. I just leave out those cameras and lenses I will most certainly be using, the M series and my 3 favourite DSLRs plus one ‘happy snappy’ camera which would have been my G9 but…

But now another sad Baldy tale to tell…

Although it was never my intention to buy ‘yet another’ camera, by accident browsing Ebay for something else (lens filters), I came across a camera that I had been very fond of but which had got ‘sacrificed’ on a trade in when I wanted to upgrade my main kit back in 2016. The camera in question was the Canon G1X which was launched in 2012, I had acquired one as new in 2014. The example offered on Ebay looked in good condition and at a reasonable price so I made an offer, we struck a deal and it arrived a couple of days later.

In basic terms it is a downstream iteration of the G9 which I have been using as my ‘happy snappy’ camera on my morning rides for the past couple of years except that it is slightly larger and heavier. However under the hood it is rather different having a sensor that is slightly smaller than APS-C and slightly bigger than Micro Four Thirds cameras. The reason that I was fond of it was that it produced very crisp results in both stills and limited but okay Full HD video plus, it had quite a good set of bells and whistles for a camera of its time period. The only down side was that it was a bit clumsy being bigger and heavier to my G9 but I got lucky here in that the one I got on Ebay came with a rather nifty and ingenious leather case purpose designed by Canon which overcomes that rather well.

But Was I Lucky ?

But of course there is always a danger with old kit that you once owned and then got again years later, your memory enhances things from back then but current reality could easily bring disappointment ! However and as we approach the end of 2021, my financial prudence earlier on in the year plus a little luck along the way meant that I was happy to risk the £130 it cost me and accept whatever the consequences. I must say that I have been quite lucky in my camera purchases from Ebay over the years only once having got a complete lemon !

However it looked good when it arrived and once I had checked it out everything seemed to work fine and as advertised. I took it out the very next morning and despite it having taken a rather cold turn weather-wise managed to take around 50 pictures on my morning ride. I must say that on my return home and getting them on my computer I was delighted with the quality of the images, memory did not deceive me, yes the images were/are that sharp so I am a happy bunny and that is the second time this year I have got lucky on an old piece of hardware.