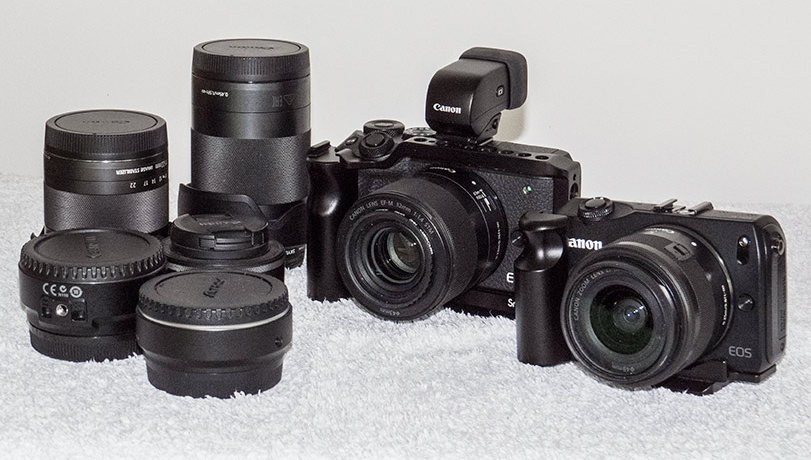 I say “fat fingers” but it is as likely that it is as much if not more a case of old age when one’s manual dexterity invariably declines. Whatever the cause if you look at all my Canon M series bodies you will see that they have extra furniture in the shape of cages or grips added. The original M body which I suppose one could call the M Mk I and the M10 have small grips originally designed for the M body.

Both the M6 and M5 have Samallrig ‘cages’ as they call them and these are designed mainly for video/film-makers because they provide extra mounting points to attach other gear to your camera be that microphones, external monitors, external hard drives, mounting rails and so on. Without these cages a film maker would only have the cameras hot shoe and tripod mount to work with which would be highly limiting for them.

However that is not the reason that I use them though it could be useful to me later on and further down the line. No, the reason I spend the extra £45/50 a time is simply to give my hands something bigger to hold on to the camera with whilst keeping the palm of my hand from accidentally hitting the tiny buttons on the back of the camera body.

It’s not because I’ve got big hands, I don’t they are quite small, it is because the buttons are tiny which is inevitable with a small camera body. The problem is that often as you are trying to take some pictures – “wham” you’ve accidentally hit a button, the camera then wants your input and won’t move on until you do – that is just so frustrating as I fiddle with reading glasses to see what it wants now !““`

I bought a Smallrig cage for my original M6 and found it worked well for me reducing the accidental button pushes to almost zero. It was slightly annoying when I upgraded to the M6 MkII to discover that I had to buy a new cage because the MkII body is slightly bigger and I couldn’t use the old one but I didn’t hesitate, it works for me.

Obviously because of the ergonomics Canon apply to their DSLR camera body designs, this is not an issue with them, they are a heck of a lot bigger and heavier with on the larger and more ‘pro’ bodies a purpose designed path/rest for your thumb so no problem with random button presses.

I do actually have a Smallrig bracket for one of my DSLRs, my 5DS but that is for an entirely different purpose altogether. It is an Arca Swiss ‘L’ bracket that is used with an Arca Swiss tripod head which is very useful for switching between landscape and portrait when doing landscape photography. It is possible to buy full blown Smallrig cages for my DSLRs but I have no intention of using any of them for video work because the mirrorless M series bodies are far more useful and capable in that role plus I enjoy my DSLRs for stills photography anyway.