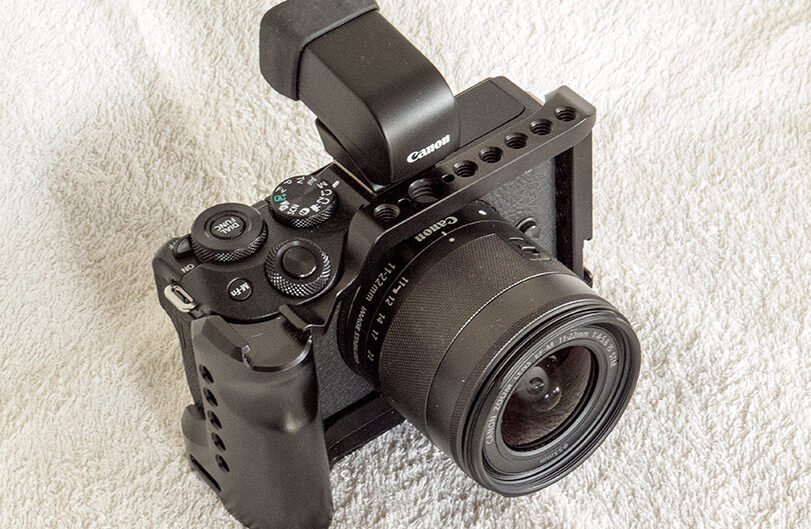 Because I recently acquired a Canon M5, I have been taking it with me on my morning bike rides when the recent spate of Winter storms allowed of course. Whilst where I live off Bridgwater Bay is relatively sheltered from all except the West Wind, we seem to have our own ecosystem where the worst of it often passes us by but not this time !

There will be another blog on this to come but working with my M6 MkII I’ve been trying out something new for me on shooting landscapes and because I’m still using the camera bag I use for my DSLRs, there has been space enough to carry the M5 camera at the same time. This has been an interesting experience because the M5 was launched in December 2016 with a ‘companion’ M6 coming in the May of 2017 and the Mark 2 version of the M6 coming along in August of 2019 so I have been shooting in generational terms, two very different cameras from a technical perspective.

In our post Covid world, everything is in short supply and a lot more expensive than pre Covid times. Due to supply problems, pretty much anybody who manufactures stuff is focusing on turning out their most profitable and hence most expensive models which obviously makes commercial sense if your production volumes are limited by supply chain issues. With car manufacturers whilst they may theoretically have cheaper “hose out” models, the only ones currently available are the fully loaded with extras top of the range ones and that makes sense.

As a camera manufacturer Canon have been far more accurate over recent years in predicting the fall in sales of cameras globally than their competitors were as the market fell because of smartphones replacing conventional cameras in the mass market.

There was a rumour around the launch of the M6 MkII in August 2019 and prior to Covid that Canon had a replacement to the M5 ‘in the works’ that might be called the M7 and lots of speculation around all this. The main reason being that Canon had not released an upgraded version of the 7D MkII and were obviously as a company going to ‘bet the farm’ on going mirrorless so the hope was that this ‘M7’ would pack all the action goodies as a substitute.

Instead in August 2019 they simultaneously launched the Canon 90D with the M6 MkII and it became clear that as it was descended from the 70D & 80D DSLR cameras with a slight video bias, this was likely the last DSLR we were going to get from Canon. The ‘innards’ of the 90D are identical to the M6 MkII but even so, a couple of pretty friendly press reviewers thought the M6 a better camera for action stuff. So perhaps the optimistic among us ‘hoped’ that the mythical M7 would bundle all we had wanted from an updated 7D into that…

Whilst new camera bodies are what the public and the media fuss over, the reality is that a company like Canon will make most of their future and stable profits through the sales of lenses because bodies come and go. It is the reason that most knowledgeable people would advise you to spend your money on the glass in preference to a new camera body.

Next month Canon celebrates 35 years of it’s EOS cameras and EF lenses, might they make a gesture to us EF lens users with a “surprise” gift of a new DSLR ? I suspect not and even if they had intended to, the consequences of Covid 19 will certainly put and end to that. Also Canon have been less than enthusiastic in supporting the M series bodies, as an example, the number of native M lenses from them is abysmal to say the least.

But It is a Shame…

Having mapped out the background for those not familiar with the story, I will now return to where I started this particular blog, me using the M6 MkII alongside an M5 because it is interesting. Whilst in the M50 camera Canon does have another M series camera with an inbuilt viewfinder like the M5, the M50 is not as ‘robust and purposeful’ being mainly a plastic build.

Additionally, in technical terms it is not as sophisticated as the M6 MkII although the M50 is probably Canon’s most successful mirrorless camera to date measured in sales volumes. Nevertheless Canon is determined to kill off both DSLRs and the M series hoping to push everyone on to the RF mount but they may come unstuck here if they are not careful.

The M5 I have is excellent as a camera body, pretty solid and a pleasure to use though of course, using it alongside the technically newer and better M6 MkII, you are all too well aware that it comes from a previous generation. My conclusion is that an upgraded copy, called the M5 MkII or the M7 would find a steady market among the enthusiast fraternity and it is a shame that if it existed at all in any form, it will never see the light of day.