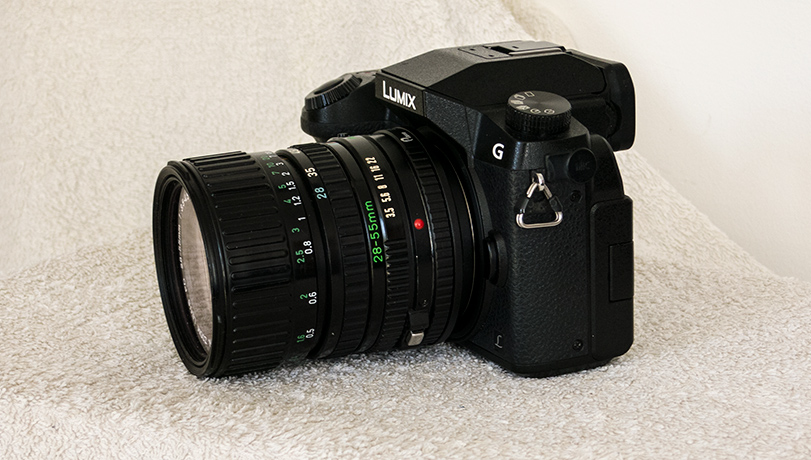 My ‘real’ journey in digital photography only took off when I moved down to Somerset to live with my Parents when I had both the time and the necessity to concentrate on it . So when I was doing a draft outline for a series of short films I realised that there were two camera bodies that were pivotal in where I was “back then” and where I have ended up today with the number of cameras and kit I have access to.

In one sense the actual cameras themselves don’t matter as much as in buying them and the consequences that flowed from those purchases having done so.

The first camera was my original Canon D30 DSLR and it was as a result of buying that body and all the subsequent lenses that means that the vast majority of my kit is Canon to this day. Camera bodies come and go but the lenses tend to stay with you.

The second camera though was unexpectedly to prove perhaps more influential in terms of consequences and that was the Lumix G7/70 micro four thirds camera and it was this story that shaped my outline script and storyboard.

The original G7 that I bought at Christmas 2015 has long since been traded in and I only used the M4/3 system for about 18 months in total but it left behind two main things. Firstly an appreciation for having a very lightweight and portable ‘system’ camera to take on trips as an alternative to my full and bulkier DSLR kit. And secondly a collection of vintage Canon FD lenses from the 1980s, a full explanation to follow.

I’m not totally too sure why I decided to buy second hand a Lumix G7 body this month, as a prop for a video shoot perhaps ? True it wasn’t expensive, though as ‘another’ camera I hardly needed it but then again and having got it the other day, I am delighted that I did. Of course whilst the vast majority of cameras at this price point were originally sold complete with a kit lens, when sold second hand they never come with a lens, the average vendor calculating that they will get more money by selling the lens separately.

But even so, I didn’t bother buying a lens for it because I still had the lens adapters to enable me using my FD glass on it in manual mode. As to why I still had these adapters the answer is simple, nobody is interested in taking them in when you do a hardware trade unless they are a big and expensive brand like Metabones, so they have been sitting in a box undisturbed for some years.

I did have to buy a spare battery simply because I always like having a spare to allow a battery swap when in the field. Oddly and I wasn’t going to buy an OEM one when there are loads of far cheaper substitutes available and ended up buying a twin pack on Amazon who informed me that I had last bought that same twin pack back in 2016, sounds about right !

The G7 had a very good specification back in 2015/16 and it still isn’t too shabby today including 4K video at 24/25 fps, full HD at 50fps, time lapse, Stop Motion, 10fps electronic shutter, 4K photo burst plus all the usual photographic modes. The down side was always their phase detect autofocus system so focusing manually really isn’t a big problem.

In terms of features for a given price point, it was far superior to anything Canon could offer at that time so the question is, why did I ditch it in favour of switching to the Canon M series that certainly didn’t offer 4K anything at that time ?

It is never a bad thing to go back and revisit your past decisions and be prepared to put your hand up if you find you got it wrong so these past few days I have taken this G7 out with me on my morning bike rides, have enjoyed using it and am likely to continue using it for awhile. Did this mean that by getting rid of it in the past when I did, I made a mistake ?

The answer to that is no, for me I made the correct decision partly because of the technology but perhaps more importantly because of the M4/3rds format itself. By shifting to the Canon M series, I gave myself a far wider range of lens possibilities, I could use native M series lenses as well as adapted Canon FD and EF lenses.

As I have written elsewhere and probably many times, I get more of a sense of involvement when shooting stills and especially bursts in action mode, using the optical viewfinder on a DSLR. In simple terms the viewfinder refresh rate on mirrorless cameras of this generation was really far too slow compared to today’s mirrorless offerings from all the manufacturers to make this model an effective ‘action’ camera for my tastes.

However, the biggest problem came from the format itself which has a crop factor of x2 compared to 35mm. Probably most of us when we first get involved with interchangeable lens cameras start out by lusting over long reach telephoto lenses so a x2 crop which turns a 50mm lens into an equivalent 100mm sounds like Nirvana. Though in reality, experience tends to point us to just how useful wide and semi-wide lenses really are for a lot if not most situations.

This is where M4/3 shows up its weakness, a kit lens of 12-60mm is useful being the equivalent of 24-120mm on full frame but you are in trouble if you want something wider which you are most certainly will if video is your focus. There are some very fine lenses available from both Panasonic and Olympus that will meet these needs but as in all things, quality costs money and really cheap wide options don’t exist.

I can remember that there was a particular lens that I wanted back then, a Panasonic 7-14mm f4, the price today new is £800 and even second hand, £460. Other options are Panasonic 8-18mm f2.8-4, £900 and Olympus 7-14mm f2.8 £1,060. Also the cheaper lenses didn’t have the wide angles or build quality which started me buying and using a collection of Canon 1980s FD lenses that I could mechanically adapt to using on this camera.

True it didn’t solve the wide angle problem, my 28mm FD lens became a 56mm equivalent plus it was manual focus only but at the time, I could pick up FD glass for peanuts and it gave me quite a range of different focal lengths to use. In fact this collection of FD glass was to prove significant because later on when I wanted to go back to shooting 35mm wet film, I had no choice other than to buy Canon FD bodies because I already had these lenses.

Why the Canon M Series ?

Whilst the ‘native’ lenses for the M series are limited, the x1.6 crop factor is easier to live with than the x2 of M4/3

In simple terms, with a 1.6 crop it is less of an issue to a x2 crop factor, it has few but some significant native lenses such as a 22mm which is equal to 35mm full frame, a 11-22mm short zoom which is 18-36mm equivalent. My most up to date camera in technical terms is my M6 MkII and despite it having an electronic viewfinder, it can be used for action type photography and burst shooting because of a faster EVF refresh rate plus also shoots 4K video etc. in short it is quite a serious and very capable camera regardless of format.

Back to the G7

Rather oddly and confirmed at my last eye test, my eyesight seems to have improved to some degree in recent years so I find that I can manually focus my FD lenses mounted on the G7 or my M series cameras fairly easily.

Okay on M4/3 my 28mm is an equivalent 56mm full frame and my 135mm is 270mm equivalent but I have taken quite a number of pictures and the majority are in pretty sharp focus so if only for its film making potential in giving me a second 4k camera for video, I’m sure that I will keep the G7 camera in use for a time.

As a camera body it is fine to handle but having it again and the crop factor brought the whole lens issues with the M4/3 format back into perspective and it was the lens issues rather than the body/brand that led to me abandoning the format back in 2017.

For my current needs buying this G7 body, is a way of documenting part of my photographic past or journey but I doubted that I will be buying any native glass for it because that would only make sense if I intended to buy a more recent M4/3 body and I certainly do not this is a one off project. Having said that, a ‘kit lens’ would be useful and I did a trade in on some redundant kit I had and got a 14-45 mm f3.5 – 5.6 for £3 in return so not a bad deal. Of course and to put that into perspective in real world terms this is a 28-90 mm zoom lens which could be useful for “talking heads” video and time lapse etc.

However for anybody in my position, with an M4/3 body and a collection of FD glass the solution would be to buy an FD to M4/3 speedbooster which is more than a simple connector. Instead of being just a mechanical connector these also have glass elements that focus the light onto the smaller image sensor of M4/3 thus reducing but by no means totally eliminating the crop factor. In the process of doing this, they also tend to increase the speed of the lens by a whole f stop because the amount of concentrated light now flooding the sensor.

As with all things, there are cheap options available below £100 all the way up to the Metabones brand where you are looking at more like £450 for one. The inquisitive side of me led to picking up a cheap version for £56 from Amazon and it works quite well with no noticeable softness in the images which is the main potential problem with these devices.

These things do work quite well, I have one made by Viltrox that I use in certain situations when mounting EF glass on to my Canon M series bodies where the speed increase in terms of f stops and wider field of view can be quite useful. However ‘camera accessories’ like say battery grips etc, do not hold a great second hand value and this applies to speedboosters too it seems, I saw a very good condition second hand Metabones one on a trusted dealer’s website for £230…but I’m not tempted.