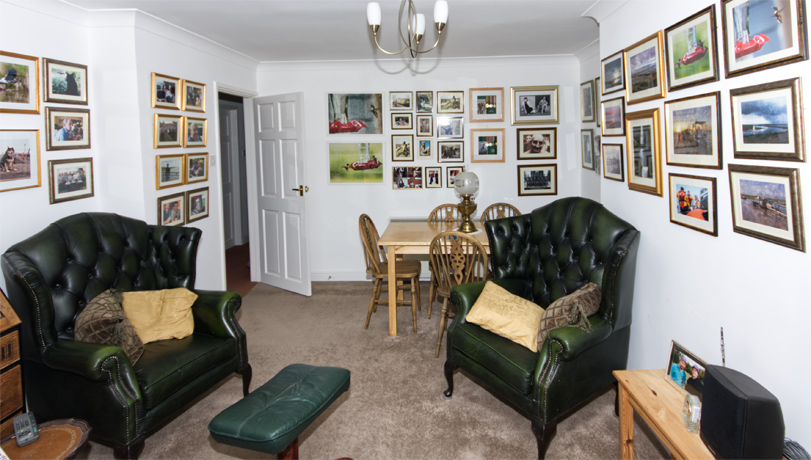 I have always printed off a few of my photographs over the years in fact, I think that every photographer should from time to time because it makes an image very ‘real’. However about 11 years ago I decided to do it ‘at scale’ though truth to tell the end result wasn’t my original intention because it took on a life of its own. I had completely redecorated the house from top to bottom with all rooms painted with white walls and ceilings and thought I might run off a few prints to provide a bit of colour here and there.

Of course in my not unusual way I ended up going down another rabbit hole and the project grew out of all proportion with the ‘few’ becoming around 200 framed pictures in the end. It didn’t happen in one go, it was spread over a couple of years with particular moments in time when learning from experience, a revised and ‘improved’ layout came into being.

I certainly couldn’t afford to have them professionally framed so they are all mounted in those simple and cheap frames that are probably made in China. One ‘improvement’ concerned these because I ended up with a variety of frame designs so I decided to paint them all a uniform cream colour using copious rattle cans – yeah I know, I don’t get out much but it did work out quite well.

Well that’s the background and over the years, various images have been changed but there has been no rolling upgrade programme so that eventually and as is inevitable, these inkjet prints will fall victim to UV light and start to fade slowly and gently. Imperceptibly at first, the colours fade until they reach a point where they can no longer be ignored and that’s were I am right now with some of them.

In truth and because of the variety of images I have on my walls, they don’t degrade uniformly, clearly the colour combinations have some impact on this but… If you pick on one image that is fading but is alongside another one that looks okay, the moment you replace the faded one it becomes obvious that the ‘okay one’ is not actually okay at all !

Although it is the pictures fading that provides the motivation to get the ball rolling, there are other benefits to the whole exercise. The most obvious being whether you want to replace a particular picture with a new print or, replace it with another picture altogether and why not ? Additionally over the years both the editing software has become more sophisticated and your editing skills too should have improved in the intervening period.

There is another aspect I found particularly fascinating and unexpected. In some cases having decided to replace a print like for like as it were, I needed to go back and find the original digital RAW file I had originally worked from. As I catalogue by time rather than subject plus I take thousands of images a year, this has meant ploughing through thousands of past images from each year which is a bit of an adventure to say the least.

This in turn made me realise that I had actually taken some quite decent images over the years and often with much humbler cameras than those I have today. Equally I came across groups of images that I should have deleted pretty much on the day I took them, “Why is that there, it is a duplicate/poorly framed/exposed badly etc. etc.”

And this is where yet another rabbit hole opens up, I will have to go back over the last 20 years (roughly) and coming forward image by image decide to ‘keep or cull’. Frankly at my age and stage I really should anyway because when I shuffle off this mortal coil the meaning and significance of most of them will go with me.

Back to the Reprints

I have just started with three clusters, a cluster being an associated group of some kind that sit together on one part of a wall space. In two thirds of the case they will just be like for like reprints but the rest will be changed images though on the same type of subject. However moving on from these first clusters will be a slower process because particularly the larger prints (A3) will be updated or replaced one by one so this will drag the whole thing out over many months.

In fact the odd thing with these larger prints is that I realised that I hadn’t printed at A3 for the past 6 or 7 years. I needed to get my A3 printer running again but thereby hangs a problem because it is 20 years old and Epson no longer provide appropriate drivers for Windows 10. Then the Gods smiled upon me and following a Windows update, Microsoft cheerfully informed me that they had found a driver for my Epson 1290M “Would I like to install it ?” Yes please and it works !