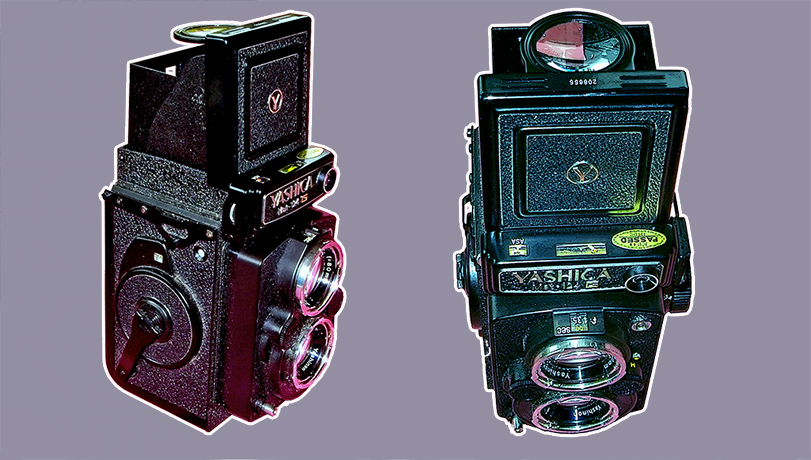 This could be called ‘Doing the Prep Work’ but it sort of illustrates how I work in terms of preparing material for future projects which may not be published for many months hence. Whilst one of my projects and themes is about the evolution of camera design through various generations of Canon camera models and that obviously will involve shooting a lot of 35mm film and showing how I handle the post processing and so on. However and as I constantly underline, this space and the topics I tackle are very personal, they are things that excite and motivate me so I have another wet film project which is a bit different in that it involves 120 medium format.

As I wrote in my first post about how I got started in “serious photography” this was courtesy of a friend of mine by using a 120 Yashica twin lens reflex camera that he lent me. Eventually I returned it to him and in 1986 on a trip to the Far East, I bought a brand new and likely one of the last because that was the year they stopped making them and I still own it to this day. However when I think about it and over those intervening years, 1986 until today, how often has this camera really been used ? It certainly hasn’t been used in the same way that the original borrowed one was.

‘Back in the day’ as they say, the borrowed Yashica was all I had and got used all the time, clumsy and awkward a box though it was, I took it everywhere but it was more than just that bit of kit, it was also my circumstances at the time. I had a young family, not too much money and I ‘discovered’ that with very little in the way of equipment, I could develop E6 colour slides at home, on the day and see what I had, that too was part of the ‘magic’ of those days. If I had been well heeled back then, I would have had my own darkroom and an expensive 6×6 camera with a Polaroid film back but that was not a possibility for me.

Perhaps and because 1986 was the year my marriage finally hit the rocks, the kids were getting a lot older and those “family days” when I used it were gone forever, buying the 124G was more about holding on to a symbol of some kind, who knows ? Whatever, the truth is that I was never to subsequently experience the same joy with my ‘new one’ I had when using my friend’s battered old copy of that same camera but this had little to do with the hardware itself.

Time to Retrain Myself

The 6x6cm square format of 120 film is not that easy to come to cold from our landscape or portrait world whether we use cameras or smartphones for photography. You really do need to work at it and I realised that I needed to start afresh and really work the format in order to be back to where I was then. Being brutally honest with myself, there are few if any stunning images that I had taken when I had occasionally used my own Yashica 124 camera over recent years and that is because as with any such tool, either you use it frequently or just don’t use it at all and therefore should sell it.

I decided that I was going to give it a proper and possibly final go and really use it fully for an extended period of time. I had used black&white film on it but now having got involved in infrared photography and the stunning B&W images you can evolve via that route, I decided that based upon my past experiences I did want to shoot colour transparencies again rather than normal colour or B&W film. The problem with this of course is one of cost, you only get 12 images on a roll and with processing, each roll will cost you around £16 a time, at that price you really want to get your eye in first with something else that is a lot cheaper to practice with.

As for why I want to shoot colour transparencies, this is a lot more that sentiment for my past, there is a far more practical reason. These 6×6 cm (2.25 x 2.25”) transparencies are “huge” compared to 35mm and far easier to digitize via scanning whilst retaining that essential wet film character which is why you are doing it in the first place. I know from experimenting with transparencies I took in the past and using my photo scanner that I can get great results but I also want to try using a DSLR to copy images and see how far I can push digitization via that route.

My Yashica has an inbuilt meter but frankly these were always crap and on top of that as they were originally designed to use a mercury battery which is now banned and the modern equivalents can lead to voltage variations and therefore inaccurate meter readings anyway. The light meter on my camera had given up the ghost within a year of buying it, I had long ago got used to using a separate hand held meter. Additionally these days, there are brilliant light meter apps that run on your smartphone or as I have done in the past, taken a reading from a DSLR and used that. It’s not that kind of technical stuff you need to focus on, accidents apart it’s really quite easy to deal with exposure issues, no the big challenge is the square format itself and that is where you need to do a lot of practice.

A square is not a natural image shape for pictures though obviously it can work really well in some circumstances with some compositions. When shooting 6×6 the majority of your pictures although taken as a square will get cropped to landscape or portrait when they are used and you will be aware of this when taking the picture so you need to train your eye to ‘see’ what you will crop out and what you will leave in for every image you take. Sound simple ? It’s not difficult but it does take practice so that you don’t even think about it in a conscious sense when working your composition, it’s like everything you will ever do, to get good or better you must practice, practice, practice.

Modern cameras rather like modern cars have so many bells, whistles and gizmos built in that most sane people will only use some of them during the time they own them. Although certainly not the latest, my DSLRs do have quite a few features I never bother with but that doesn’t mean to say that I don’t know that they are there and what they do and my 5DS has just what is needed, variable aspect ratios one of which is 1:1 or if you like square. The Yashica has an 80mm lens and 75/80mm focal lengths are considered to be the “standard” lens for the 6×6 format just as 50mm is for 35mm or Full Frame digital cameras so I will use a 40 or 50mm lens on the 5DS to complete the setup.

The 5DS overlays a tinted surround in the viewfinder to outline your image square to help you see your composition better when composing your shot which is excellent. What this means is that I can practice shooting square format images for several months until I get my eye truly in at zero cost to myself. What I’m trying to avoid is spending some £80 on 5 rolls of film and their development just to end up with perfectly exposed but frankly rather boring and bland images.

So here is a little gallery of some images taken over a couple of days where I have used my 5DS in this square mode and I am grateful to have the kit and opportunity to do this because it teaches me quite a few lessons. There are some obvious ones such as it being unlikely that I could get the picture of the Bees with the Yashica, it being no action camera plus, whilst only a centre square is being used on a 50 megapixel camera, that still amounts to a 33 megapixel end image which will likely resolve better than a 100 ISO film.

So whilst shooting like this is crucial in terms of thinking about my framing and composition, it is also important to replicate the conditions that will apply when using the Yashica. Like use a fixed lens on the 5DS because you can’t change the Yashica’s lens, there is only one field of view plus, there is no “Auto ISO” option on it either so use a set 100 ISO setting… Although it may seem all a bit nerdy for me it is also lots of fun and the reason to set myself challenges or projects. Because of the other projects and ideas I have on hand, it may well be late Autumn or even next Spring before I can get stuck into this 120 wet film project so I may well need to play with long exposures on a tripod as well to make sure that I’ve covered all variations.